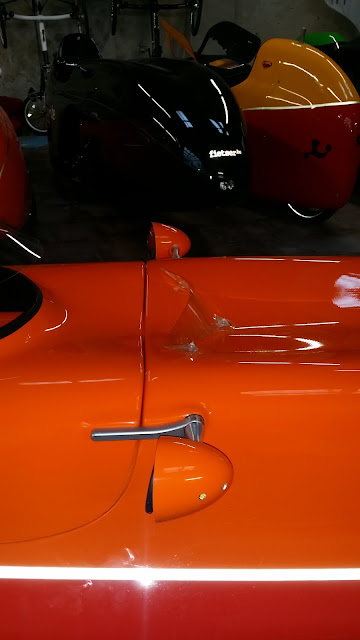 We have been testing out iterations of a new system to keep your (cycling) glasses as dry as possible. The new wind deflector is put forward of the canopy and fixed with industrial suction cups. At speed, it guides wind and rain drops over the line of sight.

Riding through pouring rain with nothing in between you and the horizon, and to see the droplets 'magically' be yanked up above your head is... awesome. It does a good job keeping the wind out of your eyes and off your head, while the canopy keeps your head warm, so you don't have to wear silly hats anymore. Anything for the street credibility of velomobiles. 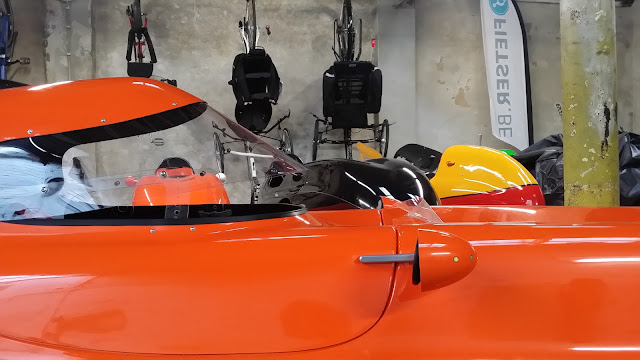 This is how the WAW canopy works:

You look UNDER the large visor,
and OVER the small deflector,
So you keep a clear line of sight on the horizon.

Incoming air is slowed down by the larger section of the canopy (warm).
New and improved:
Air and water is lifted up by the deflector (dry)

So yes you have to look under the visor. It's an application of Bernoulli's principle. Nothing is in front of you, yet air is slowed by simple alteration of volume. This is why the WAW cabrio canopy works so much better than the motorcycle style visor we used to make for the WAW1 and 2. That and the leaking from the top of course. It's not understood very well by the public, even by velomobile pro's, but also by our WAW riders themselves. To add injury to bad sight, if the canopy's too low, the screws on top of the large visor can hit your head...
Most of the rain is kept out but at speed rain tends to fall in an almost horizontal way, and when riding slowly, raindrops burst on the top and form a mist that's not too uncomfortable, but ruin your vision with glasses quickly. People without glasses don't seem to mind a bit of water mist, it's actually a good coolant.

Inside the head hole, extending the kevlar deflector, was a smaller, adjustable visor. This is the summer visor, and it's intended to use without the canopy. The summer visor creates a still bubble of air for the head, instead of the canopy. Combining them doesn't make much sense. If it rains your view is blocked by droplets on the polycarbonate (or fog from your breath), the viewing slit becomes too small for comfort, and you have to quickly tear off the summer visor.

The cover of the WAW used to slide forward for entry and city riding, attaching magnetically to the body. This possibility was lost with the aluminium hinges invented by Katanga, but the pivoting function was so much improved that the sliding wasn't missed much. This allows us to put a deflector further forward on the body itself. That would keep out the mist, as well as deflect the horizontal rain upward, over the gap we actually look through. It has to be low enough to look over because here too our view is blocked when wet. Thanks to the industrial suction cups we could experiment with different locations and angles.

Rider's view on the horizon over the front deflector. 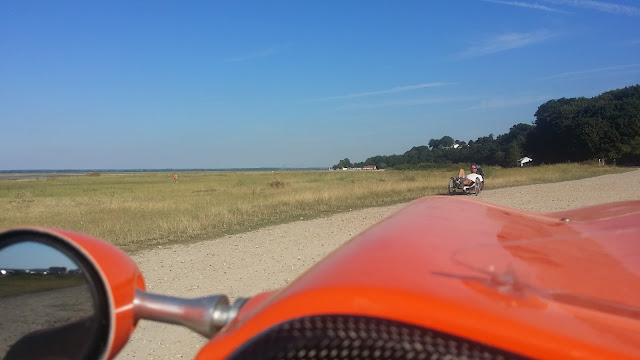 The combination of the forward deflector and canopy in heavy rain and at speed is amazing. It just works so much better than you'd expect from such a simple setup. From the rider's perspective it looks like a virtual windscreen in between the two actual visors. No windscreen wipers, no droplets or fogging blocking your view. Your face, and glasses, stay reasonably dry, I'd say the new WAW canopy stops 95% of the water. Success from a velomobilist standpoint, maybe still disappointing for automobile standards.

The start is actually the worst part. Droplets on the large visor roll off as soon as you start riding, then the wind blows them rearward and inside, onto your chest, this is mildly annoying when you're not warmed up. Perhaps it will be enough to tick the visor with a finger before starting. Or perhaps we can use a foam insert like the Orca.

The deflector works best in team with the WAWs canopy. On a cabrio WAW, or other heads-out velomobiles, adding the deflector alone is easy and at least protects your eyes and ears. I certainly cannot miss it on the Quest and Quattrovelo.
It works really well with a Flevobike roof. The sides are more open, which can be good or bad. The Bernoulli effect is clearly noticeable, and the rain deflector keeps out almost all rain.
It could make the racing caps with motorcycle visors more userfriendly: leaving the visor open partially, taping up the top, and lifting water and air up before the gap.

The difference with our old summer visor is that we used to velcro that one to the Kevlar deflector part of the cover. It's important it's adjustable to the millimetre. The still air bubble has to be just high enough to protect your eyes an ears. If the air bubble is too high, your forehead warms up so quickly you will explode. Unfortunately in the WAW4 we sort of lost the adaptability and quick removal of the deflector.

The new deflector isn't adjustable on the fly either, it's a bit of work to loosen the suction cups.  Maybe we can set it up just in front of the head hole so it acts like the old deflector reasonably well. So you'd have a summer and a winter position and angle of the same deflector. Time will tell but I think the two will be valuable.

Some different sizes and models of the deflector: Orca, Quattrovelo, WAW, Quest. 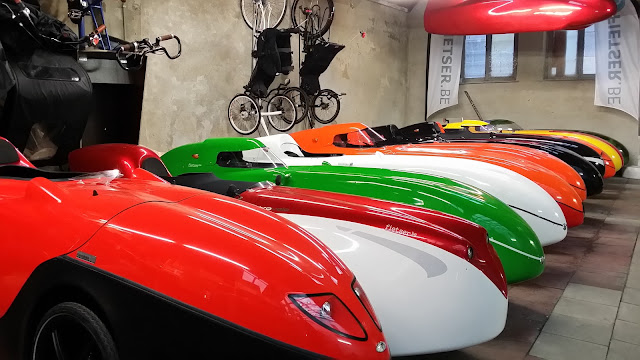 We have some hand made ones tested and available for Orca, Quattrovelo, WAW, Quest, Strada, ... Some 30 customers are testing out various versions at the moment. Too bad we hear the least from the most successful ones. We'll have them water jet cut later on.

They cost 35 € a piece. I'll publish the drawings for the different velomobile models some time, once you understand the principles you can make your own. Transparency is nice but not mandatory. The suction cups are not easy to find, we got them initially from Velomobielonderdelen.nl.

If anyone can think of a gracious way of adjusting the visor's height, pray tell...