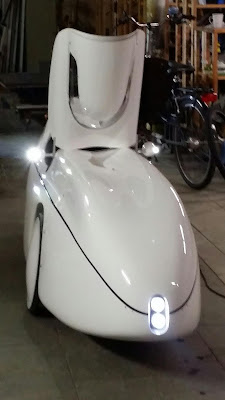 This WAW is made for a fast and long daily commute: light where it was possible, tough where needed. Part of the commute is through heavy traffic. The client is an experienced cycle commuter who knows accidents do happen someday if you're on the road long enough. Thanks to the modular architecture of the WAW, we were able to differentiate and optimize the WAW further according to the different materials' properties.

The semi-monocoque body (i.e. skin and beams working together to create the lightest possible enclosed structure) and tail are all carbon. Carbon is strong but brittle, and each broken fibre puts a load on the next one so you get long rips. Last year we saw in a growing number of cases that using a one peace carbon shell in traffic has serious drawbacks, i.e. total loss from even minor accidents. This is a carbon velo after hitting a pedestrian at 20km/h. I'd say 90% of the trouble happens to the front of a velomobile, so it's really a fantastic design feature of the WAW that you can exchange the nose. About every part of the WAW has been copied by now but I'm amazed no one thinks of a replaceable crumple zone in their design.

Oh, and another thing: it doesn't hurt aerodynamics. Tripping the laminar layer at the widest diameter is a basic aerodynamic rule.


Many carbon WAW owners have been very lucky they could get away with replacing a damaged nose. But the best velo for traffic is not only separable but also in a tough (and light!) material. As far as I know only the Rotovelo and the kevlar Milan offer this kind of protection for the rider.

Kevlar is incredibly tough and does not rip in a catastrophical way as carbon tends to do. In case of a heavy frontal accident the nose folds up and absorbs most of the impact, leaving the rider unharmed. One customer reported she hit a concrete bridge pillar in heavy wind at 50 km/h, came out unscathed, pushed out the nose and rode on. If some of the 135 million euro that our government throws at Audi would come our way, we would like to do some dedicated crash tests. For now it's unquantified experience.

Most of our customers are 'professional' cyclists, to the extent that they're often on the road, in all weather, in all kinds of traffic, in a very fast machine. So the majority of WAWs we specify are the tough Kevlar version.
This customer however was sold on the responsive ride of our 26 kg demo carbon WAW (the black one, fastest velo I've ever fit into).

It's just great we can combine the best of the two branches of WAW. 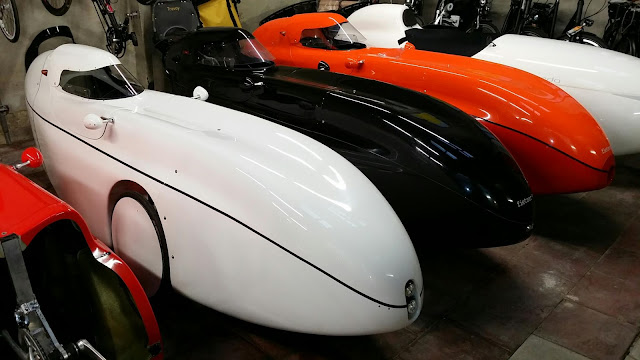 PS: one of the interesting reactions I got to this article was from John Highet. They built a styrofoam shock absorber into a carbon Quest XS. Worth a look:
My latest (4th) Quest XS is a heavily modified Carbon QXS with many mods designed to protect me as much as possible (after 3 serious crashes!) Lee Wakefield did the work and although heavier it's also (arguably)the strongest Quest in the world. Some of the mods are as follows: Full seat belts with support structure, Bonded one-piece shell (with access panel like DF) Nose crumple Zone, Strengthened seat mounts and shoulder fairings to protect from sharp cockpit edge. Some photos here---
https://www.dropbox.com/sh/1xkh2k7p0jrnjpk/AAAJf3laFDp42JarwbAM8lj2a?dl=0