It's been a bit frustrating at times to build speed bikes for road use and then see the majority buy machines designed for the races. Ha! Sometimes fate throws you an occasion to prove your point.

At the very moment I was writing the former blog post about an aramid fibre crash protection zone on an ultralight carbon velomobile, something amazing happened: 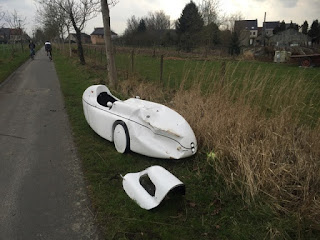 Yes that's the same WAW284, on it's maiden trip... According to the owner, he was out on his first try-out ride, on a remote cycle path, accelerating to well over 40 km/h, when he noticed a horse had started running alongside. Then suddenly the horse was in front or on top of him. It isn't exactly clear what happened but considering the damage on top of the nose, canopy AND the top of the tail he must have scooped up the horse and it must have rolled on top of the WAW from front to back.

The rider was completely unharmed. So was the horse. The owner was soon found and well covered. The carbon tail was scattered and a total loss. The aramid fibre cover and canopy had minor damage, the right cover hinge was bent. We don't know exactly how large the load exercised by the horse was, but any amount of horse is better taken by a roof than a head. The bulk of the shock was absorbed, as it should, by the shock absorbing nose, which had crumpled like a well behaved crumple zone would.


The really astonishing thing was that after the accident, the rider just popped out the nose again with his foot, to this result: 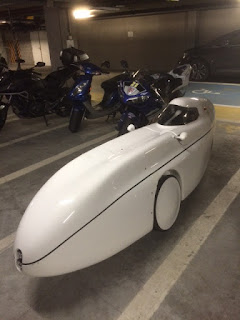 The above picture was sent to me by another customer the day after. I couldn't believe it myself. Later on the WAW came in and we just exchanged the cover hinge, some white tape was applied to the mirror cap and the small damage to the left wheel well. Otherwise the carbon semi-monocoque of the WAW was undamaged. While a new nose, tail, cover, wheel cap and cover are on order from CZ, the owner has been doing his 45 km commute every day since, without further incidents.